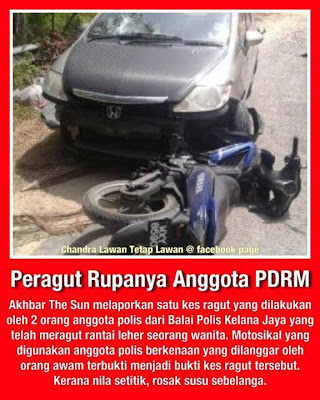 PETALING JAYA (Aug 26, 2013): Saravanan Batumalai had the shock of his life hours after ramming his car into a motorcycle used by two snatch thieves last month: they were off-duty policemen.

The first indication that they were men in blue came when he called 999 after the incident at 12.15pm on July 3 and a police patrol car arrived, only to have the policemen confirm that the motorcycle belonged to the Kelana Jaya police station.

When Saravanan went to the police station to make a report, the investigating officer called in two policemen who turned out to be the ones who had tried to snatch the gold necklace of a woman walking along the road outside his workplace in Taman Mayang, Petaling Jaya. ?

One had been riding the motorcycle while the other was his pillion.

The drama unfolded just after noon that day when the 27-year-old was in his car outside his workplace and saw two men on a motorcycle snatching a woman's necklace.

"I immediately sped up and rammed into their motorbike and both of them fell," Saravanan told theSun today.

One of the thieves got up and fled while the other tried to speed away on the damaged the motorbike and both of them fell," Saravanan told theSun today.

One of the thieves got up and fled while the other tried to speed away on the damaged motorcycle.

Saravanan rammed the motorcycle again, making the thief fall and pinning the machine under the front wheel of his car.

The thief retaliated by throwing stones in Saravanan's direction, missing him but damaging his car further with the windscreen shattered and side dented.

But that was not the end.

"He then took out a knife and lunged at me, pulling off my gold chain, and ran away. I retrieved a gold locket from the ground later which must have been from the woman's necklace," he said, adding that the woman left the scene almost immediately.

Saravanan did not pursue the man because he was armed.

Subsequently, he followed the two policemen who arrived at the scene in their patrol car to the police station at 2pm, where it was confirmed that the two-wheeler belonged to the police after inspection of its chassis number.

It was also revealed that it had been fitted with false number plates.

After a two-hour wait, Inspector Hasbullah asked him to make a statement.

"He called for two men to be brought in. They were the two snatch thieves and I told him so," he said.

One of the patrolmen later told him the duo were policemen.

Saravanan then made a report at the Petaling Jaya police station.

On July 19, Saravanan was called to attend an identification parade where he identified the two cops.

However, after that, he was not contacted by anyone until Sunday, when Inspector Hasbullah called to arrange for him to record another statement.

Saravanan has paid a heavy price for his actions – he had already spent RM3,800 to repair his car bumper and replace its windscreen with other repairs costing an estimated RM4,000. 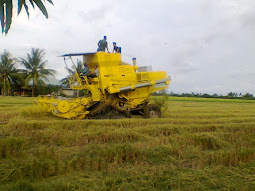